”Welcome to the beautiful park of Solliden with its luxuriant trees, shrubs and flowers.
Solliden is a part of our cultural heritage, which is of special concern to me. It was built by my great-grandmother, Queen Victoria, and was completed in 1906. When my great-grandfather, Gustav V, died in 1950, I inherited the palace. It is my intention to preserve Solliden, so that future generations will be able to enjoy its unique and glorious gardens.”
/King Carl Gustaf of Sweden

History of Solliden
The castle was erected as a summer residence for Sweden’s future Queen Victoria and was completed in 1906. She suffered from poor health and was looking for a place where she could get away from the big city. In Öland, she found a climate that alleviated her troubles and an environment that gave her peace and quiet. “Here you can breathe,” Victoria has expressed in one of her early reconnaissance on Öland. On September 25, 1903, the foundation stone was laid. On September 15, 1906, Victoria was able to move in.

Inspiration from Italy
The Crown Princess was very active throughout the construction process, drawing inspiration from Axel Munthes Villa San Michele at Capri. The Crown Princess chose the site himself and hired both nationally known architects as well as local building contractors. With the help of Axel Munthe, Victoria was able to buy building details and statues from Italy that were composed into the walls of the building. Victoria was also a collector, not least of older tile stoves, which in large numbers are built up inside the castle. Architect was Torben Grut, his best known work is Stadion in Stockholm, built for the 1912 Olympic Games. 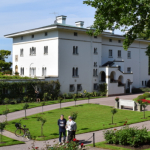 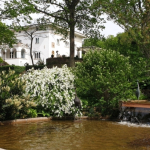 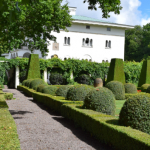 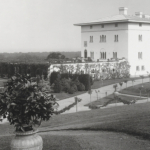 We use cookies to ensure that we give you the best experience on our website. If you continue to use this site, we will assume you agree.OkInformation about cookies